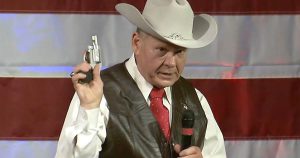 Tip for ol’ Roy: Stay away from the middle schools tomorrow. They will be watching you.

Second tip: How about we just never hear from you again, ok?

This neat-looking but impractical light powered by a falling weight has popped up on just about every blog and backwater on the net, always resulting in the same thing. Within three or four posts, someone posts up the obvious fact that this thing can’t work as well as stated. There’s just not enough potential energy in the weight to produce the claimed light output for the claimed duration. In fact, it looks like you might be able to get two minutes if you’re the most optimistic person on the planet. A far cry from the four hours the inventor touts.

So it doesn’t work. Nice idea, but not going to happen.

But then come the morons like this genius from Digg, replying to a comment stating the obvious problem with the design:

It’s especially nice that he subtlety mocks a poster for mistyping the word secret. And at the time of the screenshot above, this fucker had nine diggs. People actually believed this bullshit. And there is more, oh so much more. For instance, the Digg headline actually is completely wrong, implying the gravity lamp will stay lit for two hundred years, while actually the inventor just says the mechanics will last 200 years.

And check out this wunderkind from Reddit’s huge thread, again, replying to someone pointing out the sad truth of this thing:

and this poor soul, typical of many posters:

Sigh. You just know these assholes are the same ones that think evolution is a scientific conspiracy and global warming will be nice because those winters are just so cold now. Can they all just fucking die?

Check out this douche bag software freedom fighter: he publicly posts a crack for Twitterific, an OS X Twitter client. See, he’s unhappy because iconfactory has the nerve to ask for $15 – or use it for free and watch some ads.

We’re not talking $500 or an app that doesn’t have a replacement and he’s a dirt poor pig-fucker. He just doesn’t think he should have to pay. And check out the asshole-in-chief space cadet-in-chief in action in the comments section of the crack announcement.

So, he’s an asshole, but check out this page. This is Seth Dillingham’s post about his campaign to get people to pay. Look at the discussion thread section at Marc’s comment (provided as a handy .png here in case it gets erased.)

Is he seriously threatening Seth’s server over this? Similar words were posted in the original comments section by him, so it appears genuine.

Look – those bastions of customer service TeleBlend (read more here) have actually honest-to-God answered a trouble ticket. It took three weeks, and they actually said they couldn’t help me, but hey! Progress! Check out their email:

Keep in mind, I didn’t try to cancel through “emails” from the internets, it was through their own trouble-ticket system. Also, my actual trouble ticket was complaining that I couldn’t get through on the support line to cancel my service. So naturally, they tell me just to call them. Bunch of assholes.

Scott Adams (yes, that Scott Adams, the Dilbert creator) has apparently discovered his new calling in life: trolling on the internet. I guess this is what happens when you have too much time and money as well as legions of drooling fans.

No, he doesn’t call it trolling, he calls it “philosotainment”, which as far as I can tell, involves saying stupid things and then laughing at those who dare to correct the idiot child. On Fark, these people are laughed at. But Adams, leveraging his popularity, a waning comic strip, and a host of knuckle-dragging cult followers, has turned this into a full time job.

However, he takes it one step further than you’re average village idiot: I think he really believes what he says. He actually seems to be defending the intellectually-bankrupt Pascal’s Wager while at the same time laughing at those who counter his idiocy. It would seem like normal trolling, except that he implies that he was right all along.

Fuck you assholes and your so-called service. One group of assholes screws you out of your money and silently turns off your phone (hope you didn’t need 911), then hands your service over to another company (TeleBendOver) who proceeds to lock you out of your own VOIP hardware so you have to buy new equipment if you want to move to another provider.

I hope you assholes end up in a prison next to the Enron folks.

Look everyone, an asshole!

WTF, mate? How can you be so fucking obstinate? I’m convinced you’re just dumb. I’d bet $100 you don’t even know what stem cells are. 579 more days before you can fade into obscurity. I can’t wait.

You know, I’m sure there are people in Jerry’s family that are upset that he died. For them, I can feel sorry. To the intolerant prick himself, if I could say one thing: You’re fucking lucky there is no such place as hell.

The only thing that would make today better would be if he died of a heart attack while fingercuffing Fred Phelps and Pat Robertson. And there was video. 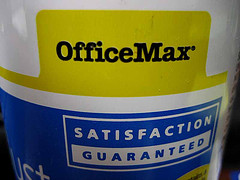 OfficeMax can DIAF. My company orders lots of generic office-supply-type stuff from them. Or at least we did until today. Two weeks ago, I ordered some labels. Usually, stuff shows up the next day with these guys; at most, three days. A week later, and still no labels. I call, and a really helpful person puts me on perma-hold, then tells me she’ll have to call me back.

Sure enough, later that day she calls and leaves a voicemail apologizing, with a new order number and says they’ll be there on tomorrow (Friday.) No problem, right? Shit happens sometimes and I’ll get my labels. Except they never show. On Monday, another call to support, another apology, another interminable hold, and an assurance that they will definitely be there later that afternoon. They use some local delivery company to get stuff from their stores to us, so unfortunately, a tracking number or anything substantial is out of the question.

Naturally, Monday passes and still no labels. Another call, another long hold time and I’m told they don’t actually know where my order is. I get a vague warning that another order might have to be placed to clear this up. If you’re keeping track, that would be the third order. <eyes rolling> I’m sure this one will go smoothly.</eyes rolling>

For some reason, this person seems to be getting annoyed at me on the phone, which I seriously cannot explain. I’ve been nothing but polite during this goat-fuck they call customer service. She’s explaining that an assistant will be calling me back. I start to ask when and she cuts me off with “Thanks for calling OfficeMax.” Except she hangs up mid-way through the last word. Bitch.

So I ordered the same labels from Amazon and used Prime to ship them overnight. We’ll see which one gets here first. My money is on Amazon.

And I’m never, ever buying anything from OfficeMax again. 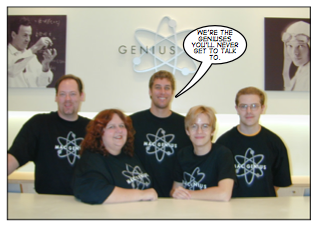 My trusty Mac Book Pro (core duo version) had some problems recently – the right speaker died in it. Not a major deal, but it would be nice to get it fixed before the warranty runs out. Fortunately, I have a newer machine, so I could afford to lose this one for a few days until it gets fixed.

So, on Thursday evening I go down to the Genius Bar at the local Apple Store. They are completely booked. An no, I can’t make an appointment unless you pay a $300 premium for AppleCare Pro. FUCK THAT. They tell me to come back in the morning, which I can’t do – I work, ya know? Go down Friday evening hoping for a miracle. No dice. Come back in the morning. Finally, I go in as soon as they open in the morning on Saturday. Literally, walk right in the door as they’re unlocked.

And the fucking Genius Bar is already booked through 5pm that day. Apparently, what the little twits in the store neglected to tell me was that starting at 8am, there is a secret web site that you can sign up for service for that day. Not that anyone told me about this before.

Huge pile of stupid in that store.

I even asked about something I read about in the Consumerist that was available – drop off your computer and they’ll call you back. It’s called Quick Drop. They wouldn’t offer it to me.

I called Apple Support, and they told me to sign up for the Genius Bar. Since I was so close to the store, they wouldn’t send me a prepaid mailer to send the computer back. Could I escalate the situation to someone else? Sure, the people who did that are the Geniuses at the Apple Store.

This is now going on three days, and I can’t spend my life fucking around with these little bitches. This is a broken computer under warranty. Fix the damn thing.

Then I remembered – there was an authorized service center in town, just a few blocks away. Drove over there, walked right in, signed some forms and dropped the machine off for service. Done. They even said it would be three days until they could look at it. No big deal – at least I didn’t have to sit there for those three days like I’ve been doing.

But they called my cell on the way home telling me they already ordered the part (a new logic board or something) and it should be in on Monday, and ready for pickup that evening, everything covered under warranty.

You damned Geniuses can suck the high hard one.

UPDATE: The machine came back on Tuesday, all fixed and everything. Way better experience than the famed ‘bar. Again – SUCK IT GENIUSES.